Waxer was a clone trooper who served with Ghost Company in the 212th Attack Battalion. A valiant solider, he fought in many battles notably on Ryloth and Geonosis, until his death during the Battle of Umbara.

When the Geonosians rebelled against the Republic again and started to create more droid factories in c. 22 BBY, the Republic urgently sent forces to retake it. Several Venator-class star destroyers and Acclamator-class assault ships were deployed to the planet. Commander Cody, Captain Rex, and Commander Jet along with several Jedi would land their gunships at a location known as Point Rain. They would proceed with their combined forces and enter a Separatist shield generator, and destroy the factory.[2]

Gunships were launched from the assault ships, but due to the heavy flak, several were destroyed. After Jet told Cody to get the tanks onto the ground, Cody began the landing sequence for his gunships. General Obi-Wan Kenobi's gunship was hit and crashed north of Cody's position. Cody's formed a defensive perimeter using All Terrain Tactical Enforcers and gunships when he found out that General Kenobi's gunship had crashed.[2]

He sent Waxer and Boil, who were clad in ARF trooper gear as all 212th troopers were, to look for General Kenobi and bring him back. Waxer and Boil ran out to the gunship, dodging enemy fire. They made it to the gunship and opened the doors. Kenobi informed them that he and Trapper were the only survivors. Boil and Waxer took them back to the perimeter.[2]

On Umbara, the 212th Attack Battalion was tasked with taking the capital of the planet.[3] General Pong Krell, a Jedi who had turned to the dark side, ordered Waxer's platoon to look for enemies dressed in 501st armor. The clones blasted each other and both sides took heavy casualties. Captain Rex later realized that they were all clone troopers and the firefight ceased after Rex informed the 212th that they were all clones. However, it was too late for Waxer, who had been fatally wounded. He told Captain Rex about Pong Krell's order, moments before dying.[4]

Waxer initially wore Phase I clone trooper armor with his squad's orange markings on it. Waxer's helmet had twenty-one tally marks with eight on the right side and thirteen on the left. He used a DC-15S blaster, a pair of DC-17 hand blasters, and a Z-6 rotary blaster cannon. In the Battle of Umbara, Waxer wore Phase II clone trooper armor, which still had his kill count on his helmet and shoulder pad, which now was a total amount of eighty. His helmet had a cartoon version of the Twi'lek girl Numa, whom he helped rescue in an earlier mission on Ryloth. 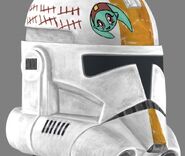 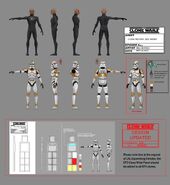 Retrieved from "https://clonetrooper.fandom.com/wiki/Waxer?oldid=55296"
Community content is available under CC-BY-SA unless otherwise noted.