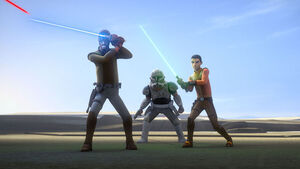 Rex: "We've gotta scatter them. Use the Sword and Shield maneuver."
Ezra: "Wait, what does that mean?"
Kanan: "We block. He fires."
—The tactic used in 2 BBY.

The Sword and Shield maneuver was a tactic used by Jedi and their Clone troopers during the Clone Wars.[1] The tactic was even used 17 years after the war, in 2 BBY during a Mission to Agamar.[2]

The Sword and Shield maneuver was named due to the process of the tactic; the Jedi or clone would deflect or block blaster bolts from the other Jedi or clone who would prepare a counterattack. Both cases were recorded in 19 BBY,[1] with clones deflecting and Jedi attacking, and in 2 BBY,[2] with Jedi deflecting and a clone attacking.[1][2]

The maneuver was used in 19 BBY, during the Battle of Ringo Vinda, by Commander Doom's unit, who used Blast shields to block oncoming fire from Destroyer droids, while Jedi General Tiplar manipulated the droids by lifting them in the air. The troopers rolled Electro Magnetic Pulse grenades under their shields and disabled the droids.[1] In 2 BBY, while on a Mission to Agamar, the tactic was performed by Jedi Kanan Jarrus and Jedi Lieutenant Commander Ezra Bridger, as well as Captain Rex. The two Jedi defended Rex while he prepared thermal detonators and threw them at the oncoming droids.[2]

The tactic was also used again at the end of the Clone Wars in 19 BBY, by then Commander Rex and Ahsoka Tano while escaping the attacks of the 332nd Legion while their republic cruiser was falling out of the sky. The attacking troopers were out to kill Tano under the directive of Order 66.

Retrieved from "https://clonetrooper.fandom.com/wiki/Sword_and_Shield_maneuver?oldid=55703"
Community content is available under CC-BY-SA unless otherwise noted.