Rod was a clone trooper pilot who served in the Grand Army of the Republic during the Clone Wars. He was part of Red Squadron and was the tail gunner for Goji's BTL-B Y-wing starfighter.

Rod was one of the clone pilots chosen, with Goji as the other, to drop an electro-proton bomb on the Separatist's forces at Malastare during the Battle of Malastare. His ship was escorted by ARC-170s, but Rod still manned the Y-wing's tail cannon. The bomb that he was assigned to launch was successfully dropped in its designated area and destroyed the droid forces, but awakened the huge Zillo Beast.

Rod wore Phase I pilot armor with a life support pack. He had red markings on his pilot helmet, which had two birds painted on it. 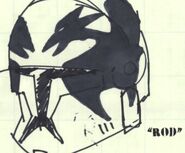 Concept art for Rod's helmet
Add a photo to this gallery

Retrieved from "https://clonetrooper.fandom.com/wiki/Rod?oldid=54899"
Community content is available under CC-BY-SA unless otherwise noted.