Goji[3] was a clone trooper pilot who served faithfully in the Grand Army of the Republic during the Clone Wars. He piloted a BTL-B Y-wing starfighter, which he used in the Battle of Malastare. Goji was the leader of Red Squadron.[4]

In 21 BBY[5], the Republic forces on Malastare were nearly pushed to their breaking point. Goji and his copilot Rod, having been assigned as the carriers of an experimental electro-proton bomb, flew their Y-wing out to the battlefield with an escort of ARC-170 starfighters. Despite the enemy flak, Goji successfully dropped the bomb into the middle of the droid army, destroying the entire force.[6]

Goji was effective at piloting and bombing, having had very extensive training in his field of skill.[4]

Goji had Phase I pilot armor with a life support pack. His helmet was painted green on the front with twin orange eye marks above his visor, appearing to represent a monster.[6] 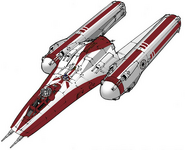 Concept art for Goji's helmet
Add a photo to this gallery

Goji's name is based off the mythical Japanese creature Gojira, otherwise known as Godzilla.[3]

Retrieved from "https://clonetrooper.fandom.com/wiki/Goji?oldid=54857"
Community content is available under CC-BY-SA unless otherwise noted.