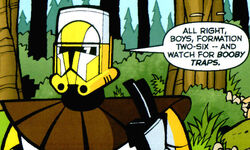 Formation Two-Six was a formation used by clone trooper scouts in The Grand army of the Republic during the Clone Wars.

In 19 BBY, Jedi General Aayla Secura and the 327th Star Corps were deployed to find a scouting team on the planet of Endor. The 327th stayed at the Republic's outpost there, while Secura went off on her own. Before she left, however, Commander Bly ordered his men to use Formation Two Six.[2]

Retrieved from "https://clonetrooper.fandom.com/wiki/Formation_Two-Six?oldid=55707"
Community content is available under CC-BY-SA unless otherwise noted.