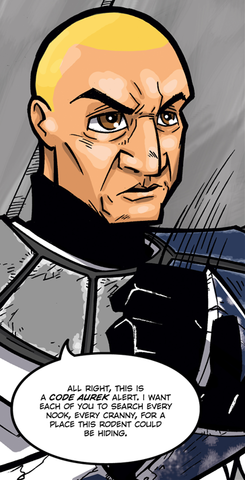 "All right, this is a Code Aurek Alert. I want each of you to search every nook, every cranny, for a place this "Rodent" could be hiding."
―Captain Rex

Code Aurek was a code used by clone troopers during the Clone Wars.

Code Aurek was an alert code used by Commanding Officers during the Clone Wars. The code was used to bring a whole station's detachment on alert and patrol.[1]

In 22 BBY, Captain Rex and Marshal Commander Cody went on standard inspections among the Republic listening outposts. During their time at Pastil Station, Bouncer and Stripe revealed to the commanders about "Rodent", a MSE-series droid who cleaned the base. However, Cody and Rex realized that the droid was using a ploy, cleaning while it stole information from the Republic, gaining insight into what intel they had assorted.[1]

Rex issued Code Aurek to put the whole base on alert, so they could search every nook and cranny for the droid. They eventually found the droid, with Bouncer setting off a V-1 thermal detonator. which destroyed it, as well as a portion of a base.[1] This would not be the highlight of their inspections, as on the Rishi Moon Outpost, the commanders, alongside a small unit of troopers, fought off an invasion force and destroyed the base.[2]

Retrieved from "https://clonetrooper.fandom.com/wiki/Code_Aurek?oldid=55701"
Community content is available under CC-BY-SA unless otherwise noted.