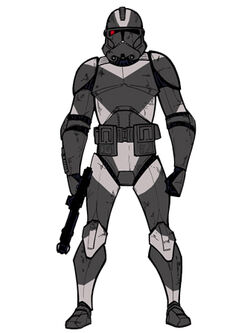 Clone shadow troopers were clone troopers that were trained for stealth ops, gathering intelligence, domestic affairs within the Republic, and handling security operations. They were devised by Director Armand Isard under the Republic Intelligence. They were deployed to perform classified missions that required them to operate covertly.

Director Isard had created the clone shadow troopers to replace the ARC and commandos that were constantly dying by the hands of the Separatists.Like many of the Republic commandos, clone shadow troopers were trained to be lethal and efficient. They were trained to work independently or in pairs.They are far more superior than a commando when it came to operating covertly and combat due to their extensive training and armor capabilities. Their mission on Utapau was to place jammers in six main sinkholes so that General Grievous, who had launched the invasion there, would not be able to notice High Jedi General Obi-Wan Kenobi's entrance or his invasion group. They succeeded, as Obi-Wan was not noticed and neither was his group.

Later on, Inquisitor Valin Draco took the troopers as their guards because they must exceptional warriors if they could guard the Empire's secret storehouse. After that, around 17 BBY, a small group of clone shadow troopers went with Draco to retrieve Darth Rivan's holocron, where they encountered some Alderaanian Resistance agents working for Jedi Master Denia; they were easily defeated.

The clone shadow troopers were eventually the model for the storm commandos and Shadow Stormtroopers.

Clone shadow troopers were equipped with superior Phase II armor. Unlike other Phase II armor, the shadow clone trooper armor granted them superior protection from blaster shots which had magnetic seals that could repel blaster bolts. Their clone trooper armor and did not change during the rise of the Galactic Empire.The Phase II armor was black and grey with a red visor on their helmet. The helmet featured an integrated com-link,audio pick-up, two artificial air-supply hoses, and a broadband communications antenna powered by a single power cell. The helmet also had built-in filtration systems that extracted breathable atmosphere from polluted environments. The standard weapon for clone shadow troopers included DC-19 "Stealth" blaster rifles, DC-15A blaster rifles, and DC-15S blaster carbines. They all were equipped with cloaking devices, and their officers had kamas and pauldrons. Each shadow trooper was also equipped with a thermal detonator,time detonator for sabotage missions and vibrodaggers for close quarter combat. On rarer occasions shadow troopers were equipped with an RPS-6 rocket launcher that was used as a portable guided/unguided anti-vehicle weapon.

Retrieved from "https://clonetrooper.fandom.com/wiki/Clone_shadow_trooper?oldid=56029"
Community content is available under CC-BY-SA unless otherwise noted.