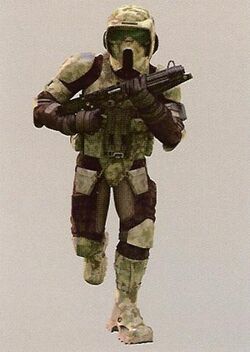 Clone scout troopers, also known as clone swamp troopers[1] were variants of the widely known clone troopers. They were deployed in swampy areas, and had camouflaged armor to do so. One trooper was a swamp trooper and was part of the 41st Elite Corps.

A battalion of swamp scouts from the 501st Legion[1] and othersfrom the 41st Elite Corps were deployed during the Battle of Kashyyyk to aid and free the Wookies from the Separatists. During the initial fight, the swamp troopers fired down at the Confederate forces from tree tops and used vehicles such as the AT-RT and the ISP swamp speeder.

Scout troopers had special scout helmets with a broader visor for a better view. They wore a special form of plastoid armor, which did not have armor plates on the forearms and thighs to allow for more mobility. Their armor was camouflaged and the visor had a green tint to blend in with the jungle. They used the DC-15S blasters and DC-15A blaster rifles in battle.

Retrieved from "https://clonetrooper.fandom.com/wiki/Clone_scout_trooper?oldid=56037"
Community content is available under CC-BY-SA unless otherwise noted.