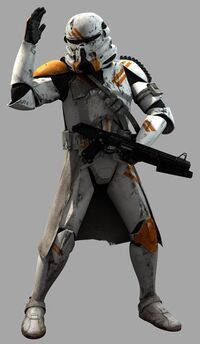 Clone paratroopers, also known as clone airborne troopers, were special clone troopers who were trained for high assault altitude drops. They were equipped with special armor and equipment for this task.

Clone paratroopers, as the name implied, were troopers that were dropped from ships in the air to the battle ground. They carried much equipment, and often paraglided or parajumped from aircraft along with their regular duty of using jetpacks. When using jetpacks, they would let themselves fall for three seconds, and then would activate the jets. Once they reached the ground, the jetpack would be dropped and they would act as regular infantry. They differed from jet troopers though, because they were deployed to the ground, while jet troopers fought in the air.

Clone paratroopers wore specialized Phase II armor. Their armor was basically the same, but they had "beehive" helmets for their airborne roles. It had a smaller visor with no fin on top. The paratroopers also wore small bags for holding various equipment and had a small armor patch on the right side of their chest plate, which connected with their right magazine pouch via a sash. They carried spare magazines and grenades within small pouches on their arms and torso, and also wore tan-colored kamas to protect against shrapnel.

Paratroopers were equipped with special jetpacks for their high altitude drops. These had large wings, which were retractable and made a hydraulic hiss. When the trooper came in contact with the ground, the wings automatically drew in to make the wearer less cumbersome. Paratroopers had DC-15S blaster carbines and DC-15A blaster rifles for their weapons.

Retrieved from "https://clonetrooper.fandom.com/wiki/Clone_paratrooper?oldid=56043"
Community content is available under CC-BY-SA unless otherwise noted.