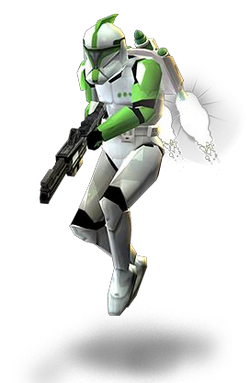 Jetpack troopers, also known as jet troopers or aerial troopers, were a special variant of clone trooper that served in the Grand Army of the Republic during the Clone Wars and the early days of the Galactic Empire.

The jetpack troopers served in the First Battle of Geonosis, fighting against the Separatist forces there.[1][2] A specific trooper was assigned to acquire a Geonosian holocron that fell from one of the Geonosians atop a crashed ship. The holocron was successfully delivered to Checkpoint Alpha and sent to be analysed for its secrets.

Jet troopers were also deployed to several different planets, under the 501st Legion, 327th Star Corps, 91st Mobile Reconnaissance Corps and 41st Elite Corps. In 22 BBY, the troopers served at battles on Mission to Alzoc III, Skirmish on Juma-9, and Battle of Bephour.[3]

In 20 BBY, several of the troopers were also deployed to the Defense of Cato Neimodia with the 501st. The troopers fought with the 501st, under Jedi General Anakin Skywalker and Jedi Commander Ahsoka Tano until the two were called away, as someone bombed the Jedi Temple.[4]

When the Empire rose to power, the jet troopers were succeeded by the Imperial jumptroopers,[6] sky troopers,[7] and dark troopers.[2]

In 12 BBY, the Kaminoans began cloning Jango Fett troopers to revolt against the Galactic Empire, and start a rebellion. Jump troopers and Rail-class ARC troopers began fighting against the Stormtroopers deployed on the planet, until Boba Fett came down to the planet and began killing the troopers. The clone resistance was quelled, and all the anti-troopers, as they were known, were killed.[2]

The jet trooper possessed a JT-12 jetpack and a variety of weapons, including DC-15S blaster carbines, DC-15A blaster rifles, DC-17 hand blasters, EMP launchers and V-1 thermal detonators. The troopers possessed both Phase I and Phase II armors. The anti-troopers bore DC-15x sniper rifles, which they used on Stormtroopers.[1][2]

Concept art for Jetpack troopers
Add a photo to this gallery

Retrieved from "https://clonetrooper.fandom.com/wiki/Clone_jetpack_trooper?oldid=56915"
Community content is available under CC-BY-SA unless otherwise noted.