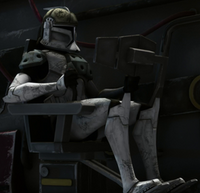 Clone Tank Gunners, sometimes called Clone Gunners, were clone troopers within the Grand Army of the Republic who specialized as gunners on many vehicles such as AT-TEs, AV-7 cannons, and other heavy artillery. While most clones were trained to use heavy artillery, some had specialized training for these tasks. Most gunners were trained as experts in this field as to be able to engage and destroy the enemy before they get within close range combat. Even though one of the hardest things to forget for recruits is that sustained blaster fire can give away a position, in order to work efficiently,clone gunners had to forget this rather useful trait.

For equipment, clone tank gunners used DC-15 series blaster pistols for close-ranged combat, even though they normally were able to eliminate the enemy before they were able to get close. They wore custom Phase I armor with green and bronze coloring on the top with the Republic symbol. They also have extra armor on the front for recoil protection. They also had insulated helmets for noise protection.

Retrieved from "https://clonetrooper.fandom.com/wiki/Clone_gunner?oldid=56068"
Community content is available under CC-BY-SA unless otherwise noted.