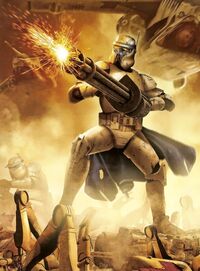 During the Battle of Hypori, ARC trooper captain Fordo led a team of ARC troopers to free the cornered Jedi. A heavy gunner was seen getting off an LAAT/i gunship to assist. Also, during an attack on Kamino in 19 BBY, Rail-class ARC troopers, also known as "Anti-troopers" fought stormtroopers and Boba Fett. Heavy gunners were seen with those troopers.

ARC trooper heavy gunners used lots of heavy machinery such as a Reciprocating Quad Blaster, or "Cip Quad", and a Z-6 rotary blaster cannon. Their armor was special, as it had targeting feeds that connect the HUDs and articulated harness, which gave the trooper great control of the weapon. They also wore kamas and rangefinders.

Retrieved from "https://clonetrooper.fandom.com/wiki/Advanced_Recon_Commando_heavy_gunner?oldid=56033"
Community content is available under CC-BY-SA unless otherwise noted.