The 332nd Company was a unit of clone troopers within the 501st Legion. It was placed under the command of Rex and former Jedi Padawan Ahsoka Tano during the Siege of Mandalore.[4]

The 332nd was a clone trooper unit that fought during the Clone Wars. In 19 BBY, Jedi Padawan Ahsoka Tano was accused of a crime and almost sentenced as guilty by the Jedi Order. Though she was later proven innocent by Anakin Skywalker, she became alienated with the Order and left.[4][5] Later that year, Tano would gain intelligence that the rogue Sith Lord Maul had been stationed on Mandalore.[6] Bo-Katan, the leader of the Mandalorian rebels, the Nite Owls, came to Tano and asked for her assistance.[6]

The two went to Jedi Generals Anakin Skywalker and Obi-Wan Kenobi asking for their assistance. Skywalker was willing to assist, however, Kenobi believed that they were forced to see what the Jedi Council decided.[3] Skywalker took Tano for a walk around the ship, stating he had a surprise for her. The two walked into the hangar bay, with Tano discovering that many of their unit, the 501st Legion, had repainted their helmets as a homage to her.[4]

Suddenly, the alarms starting going off, with Kenobi entering the hangar to inform the two that they were forced back to Coruscant to rescue the Chancellor. Tano insisted that they help the Mandalorians, with Kenobi still weary. Skywalker convinced him that he would form a detachment of the 501st and promote Rex to Commander and Tano could serve as an Advisor, which left Kenobi appeased.[3]

The unit quickly deployed to the planet, receiving instant aerial attack and losing a few Low Altitude Assault Transport/infantry gunships. The troopers and Mandalorians who were riding in the LAAT/i's deployed with their jetpacks and began to attack the incoming members of Maul's contingent, the Shadow Collective. Tano deployed as well, without a jetpack, jumping from gunship to gunship killing many of the enemy Mandalorians, as well as rescuing one of the 332nd's clone pilots. Tano landed concurrently with the rest of the companies and began to attack the group on the ground. Several Nite Owls had already begun the assault on the ground by the time the company arrived. Ursa Wren and her unit had already contained the docks.[3]

After taking down several Mandalorians and pushing back their forces, Tano, Rex, and a few other troopers oversaw the battle, watching the explosions and blaster bolts. Tano received a transmission from Captain Vaughn, who had intelligence of the location of the Shadow Collective's leadership, namely Gar Saxon and Rook Kast. Tano, alongside three other troopers, met with Vaughn and his team. Tano, Vaughn, and the small squad embarked through the tunnels hoping to find the leadership to capture them. However, they were unaware that the whole ruse was an ambush. One of the Shadow Collective opened fire on the unit, which led them to follow in pursuit, with Tano attempting to keep them back. When she caught up with them, they had all been shot and killed, save for Vaughn, who had been fatally injured. While Tano comforted him, he apologized for not obeying orders.[3] Shortly thereafter, Maul appeared, questioning why Tano was there and not Kenobi.[3]

Shortly after a brief standoff with Maul, Rex and a squad of troopers appeared, rescuing Tano from the Mandalorians. After a brief pursuit, they lost them. Upon returning to their command center, Tano, Rex, and Bo-Katan met with Kenobi via hologram, where they were informed that no reinforcements could be sent. Dooku had been killed by Skywalker and he had been given the assignment of watching the Chancellor. Before Tano could ask more questions, Rex informed her of an attack on C-deck. Tano and Rex rushed to C-deck, where the unit who were securing the area were all wiped out, save for Sterling. He informed them that Advanced Recon Commando Jesse, who had also been stationed there, had been taken captive by Maul.[7]

Eventually, Tano would encounter Maul again, alongside Bo-Katan and Rex, where he held Jesse hostage. He let Jesse go as a sign of good faith, with Rex taking him to rest up. A battle broke out between the 332nd and Nite Owls against the Shadow Collective, which led Bo-Katan to rally her troops, while Tano faced Maul alone. Rex led the campaign on the outside, with an All Terrain Tactical Enforcer being deployed to assist in the battle. Tano would capture Maul and the combined forces of the 332nd and Nite Owls managed to force a surrender on the remaining Mandalorian forces.[7] Eventually, Order 66 came in and the 332nd decided that their loyalties lied with the Republic, not Ashoka. They attempted to kill her several times, but Ashoka escaped with the help of Commander Rex, who had his inhibitor chip removed by Ahsoka. The rest of the 332nd was killed when their Venator-class Star Destroyer crashed on a moon.

They had Phase II armor with dark orange markings that resembled the facial markings on Ahsoka's face.[4] As far as equipment, the unit wielded several DC-15S blaster carbines, DC-15A blaster rifles, and jetpacks. As the leader of the unit, Rex also wielded a pair of DC-17 hand blasters and a rangefinder.[3] 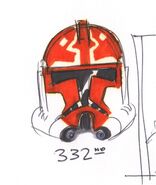 Early concept art
Add a photo to this gallery

Retrieved from "https://clonetrooper.fandom.com/wiki/332nd_Company?oldid=57460"
Community content is available under CC-BY-SA unless otherwise noted.